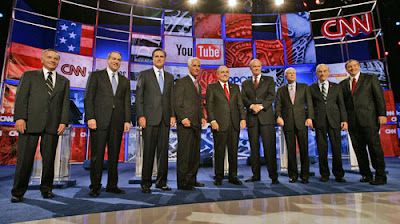 Gov. Huckabee had another outstanding debate performance last night. Obviously we weren't the only ones who thought so. The Southern Political Report is reporting a Florida Chamber of Commerce survey of 341 Florida Republicans who stated they were undecided, intended to watch the debate and agreed to phone in their opinion immediately after the ending.

Here are the results:

Quoting from the Southern Political Report article: "A survey of over 1,035 Iowa Republicans taken in the last twenty minutes of the debate showed Huckabee the winner in that state as well. The numbers virtually mirrored Florida." They were:

"Interestingly, the Iowa poll did not survey only undecided voters. Yet, both a survey of undecided voters in Florida and a general survey in Iowa showed Huckabee the winner.

In the media Spin Room, most of the major candidates were left with little if any media attention as virtually all print and broadcast media circled Governor Huckabee."

Click here to read the full transcript of the debate.
Posted by Anna at 9:50 AM