The Delegate Math John McCain Might Not Want To Advertise

The following article is from http://thevaluesvoter.spaces.live.com/

The Delegate Math John McCain Might Not Want To Advertise
Eleven of the 17 contests that John McCain has won so far have come in states that voted Democratic in 2004. Ten of these states have voted Democratic in the past four elections. Eight of these states were Winner Take All, giving McCain 309 delegates from states that have practically a zero chance of voting Republican in the fall.Two other states, California and Illinois (home state of both Barack Obama and Hillary Clinton), gave McCain a whopping 170 delegates, giving him a total of 479 delegates from states that will never vote for a Republican in the General Election. 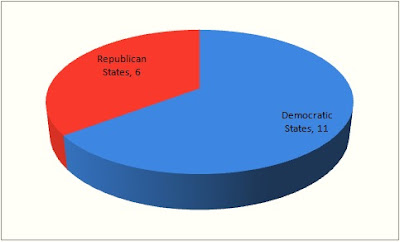 If John McCain does win the Republican nomination, he has to thank not only the Republican Establishment which has coalesced around the only Washington Insider left in the race. He also has to thank the voters in eleven states that did not vote Republican in 2004, including ten states that have voted for Democrats in 2004, 2000, 1996, and 1992. Although some would claim that this is a good indication of how well McCain does with liberal and independent voters, the reality is that there is practically no chance that any of these states that have helped give McCain a massive delegate lead will vote for the GOP candidate in the fall.

Here are a few observations based on analyzing the contests held to date:

* In states that haven't voted for a Republican in the past four elections, McCain won 97.98% of the delegates available and edged out his competitors by an average of 22.75% in the popular vote.

* In the six states that McCain won which voted Republican in 2004 (and which Republicans need if they will win the White House in November), McCain edged out his competitors by an average of 5.95%. In five of these six contests, McCain faced more than one challenger who earned more than 5% of the popular vote. Excluding Virginia (the one red state where he faced a sole competitor who earned more than 5%) and his home state of Arizona, McCain edged out a set of competitors who likely divided the conservative vote by a miniscule 3.25%. In many of these traditional states, the Democrats have shown surprising strength.
* In the red states that McCain won (almost all by a very small margin against multiple competitors) - South Carolina, Florida, Missouri, Oklahoma, Arizona, and Virginia - Democratic Primary turnout edged out Republican Primary turnout by an average of 15.25%. In every state except for Florida, where the delegates were not supposed to be sent to the national convention, and McCain's home state of Arizona, the Democratic turnout exceeded that of the Republican turnout by an average of 48.5%, magnifying the risks to the GOP of running a candidate who does not motivate every available Republican voter to go to the polls. 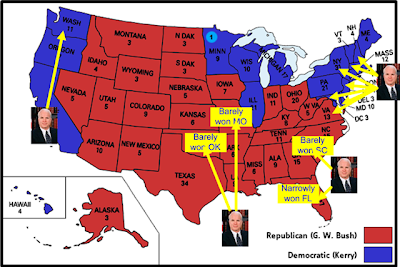 In contrast to McCain, all of former Governor Mike Huckabee's wins have come in states where a Republican must win in order to win the General Election.

The bottom line is pretty clear: McCain has a huge lead largely because of voters who are not representative of the those who have given the GOP its most recent victories. And one additional issue is evident. Ability to attract swing voters is not such an asset in states that have a prolonged history of voting for Democrats during a year in which there are two popular Democratic candidates and an unpopular Republican President. And when the popular leading Democratic candidates is showing unusual strength in places where the leading Republican candidate needs to win but is not winning by much, it spells trouble in November according to the current course.
McCain is the candidate that many voters strongly prefer. Just ask those who live in the states who won't vote for him in November. Or the Republican Establishment, which has to be completely freaking out. Or the media. Just don't ask many of the voters who live in red states, who either answered "no" - or who haven't been asked yet.
Posted by Sarah at 8:18 AM