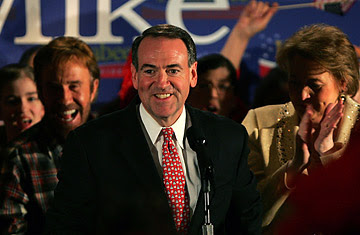 Gov. Huckabee gives victory speech in Des Moines
Despite the fact that most polls in Iowa showed Gov. Huckabee and Gov. Romney in a dead heat in Iowa this week, Gov. Huckabee had an incredible 9-point lead over Mitt Romney last night. In less than an hour after the caucuses began, most major news sources had already named Huckabee the big winner. With 95% of the precincts reporting, here are the results:

CNN conducted entrance polls in Iowa last night and had some interesting results. Of the 60% of Iowa Republicans who caucused last night, 60% were Christians. An overwhelming number of these - 46% - voted for Huckabee, compared to 19% for Romney and smaller percentages for the other candidates. For those who say Huckabee isn't a conservative, Iowans have a different view. Gov. Huckabee won the "very conservative" and "somewhat conservative" voters by a sizable margin while Romney and McCain tied with the highest percentage of the moderate conservative vote. The Iowans were also asked what they thought was the top quality of their candidate. Of those who picked "says what he believes," Huckabee was the top choice at 33%, Thompson at 22%, McCain at 16%, and the others lower. Of those who said "shares my values" was the top quality of their candidate, 44% chose Huckabee compared to Romney's 26%. Much more entrance poll information is available at this link: http://www.cnn.com/ELECTION/2008/primaries/results/epolls/index.html#IAREP One more interesting fact: of the voters who decided which candidate to support the day of the caucus, 29% chose Huckabee! (That's 10 points more than Thompson, 11 points over Romney and 12 points above McCain.)

Most news sources are reporting that Gov. Huckabee took Iowa last night because of the major effort on the part of Christians, pastors, homeschoolers and pro-lifers to volunteer, tell their friends and get out the vote. It is true that Gov. Huckabee couldn't have done it without his grassroots supporters, and we salute them for their hard work, for their loyalty, for their energy and for their enthusiastic support. But the real reason Gov. Huckabee won Iowa is best described by the words of a supporter who posted the following on hucksarmy.com:

"I wanted to let you guys know what was happening at the Mike Huckabee victory party between 6:30-7:00 pm last night. At that hour there was probably only 50-100 supporters in the ballroom, almost exclusively the people who had come from other states to help at campaign headquarters (because the locals were at their caucuses) plus another hundred members of the media. A small group of Huckabee supporters formed a circle, joined hands and began to pray. For 20 minutes the praying continued; it was a fervent beseeching of the Lord for our nation and for that election night. My two daughters were in that group and many others. You could feel the Spirit of God in their midst (it was one of those prayer times when it seems like one is really talking to the Almighty). Well, picture this: All these cameras and reporters with nothing to do (no returns yet)and this group of Christians fervently pouring out their hearts to God. You got it. After about 10 minutes, that small group of believers were surrounded 3 or 4 deep by photographers, video cameras and scribbling reporters trying to record this crying out to God. The media crush on that prayer circle was only exceeded all night by the media crush when Mike came into the room."

May the Lord receive all the glory for the victory last night.