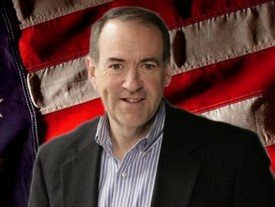 This is the best news so far! After coming in a definite second in the daily Rasmussen Presidential Republican Poll for 2 days, today Gov. Huckabee has gone up to 18%. Combined with Rudy Giuliani's falling numbers, it places Gov. Huckabee in a tie for first place nationwide!!!! "This is the Lord's doing; it is marvelous it our eyes." Psalm 118:23

From today's Rasmussen Report:
"With less than a month to go before the Iowa caucuses, the Rasmussen Report's daily Presidential Tracking Poll for Tuesday shows that Rudy Giuliani has fallen back in the pack in the race for the Republican Presidential Nomination. Giuliani’s support has fallen to 18% and four other candidates are within six percentage points of the lead. Mike Huckabee is enjoying an amazing surge and now shares the top spot with Giuliani at 18%. Close behind are John McCain at 14%, Fred Thompson at 13%, and Mitt Romney at 12%. Ron Paul attracts 7% of likely Republican Primary voters nationwide and no other Republican candidate reaches 2."

Even though our candidate is ahead, and the only candidate continuing to surge, it doesn't mean that we can sit back and relax. Criticism will be coming to Gov. Huckabee from all angles now. The Romney campaign has already sent out a mailing to Iowa voters slamming Gov. Huckabee's record and stand on the issues. Now is the time for us to really work on getting the truth out to the voters of America! And while it feels great to be tied for first place we must never forget Who is giving Gov. Huckabee success. "God is the judge: He putteth down one, and setteth up another." Psalm 75:7 The Lord is blessing His servant Mike Huckabee and we give Him all the glory!!