Early voting ends this week, so some of us went to vote this morning.
The McNairy County Courthouse (from the side) 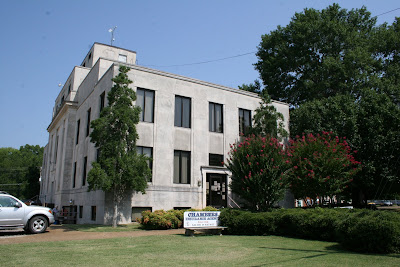 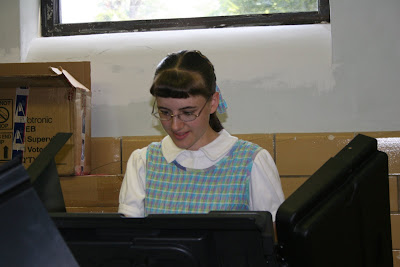 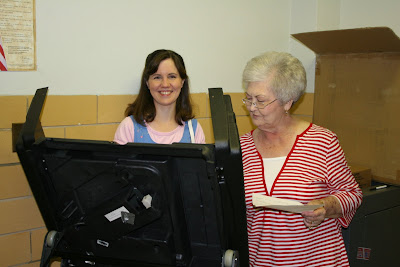 And here are a couple of reminders for those who haven't voted yet! :) 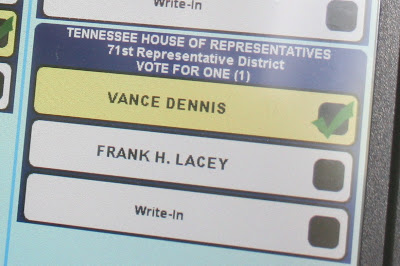 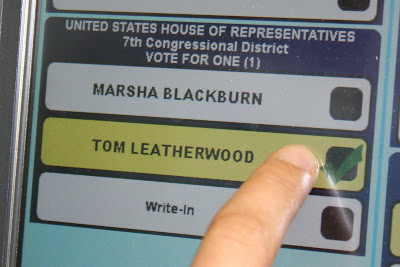 Mr. Leatherwood never said he supported SCHIP -- the article the Blackburn campaign referred to in the mailer simply said that it was hypocritical for Marsha to oppose that bill WHILE she supported the Houston Zoo earmarks. The article can be found here: http://www.commercialappeal.com/news/2008/jun/04/leatherwood-talks-02

As to SCHIP providing health care for illegals, Senator Lamar Alexander (who Marsha Blackburn supports) stated in his weekly column that SCHIP "does not expand access to include illegal immigrants. It explicitly prohibits illegal immigrants from receiving Medicaid and SCHIP benefits. It requires, for the first time, an established process for states to verify citizenship of SCHIP enrollees." The link to Sen. Alexander's entire article is here.
Posted by 11 Smiths for Huckabee at 8:00 PM No comments: 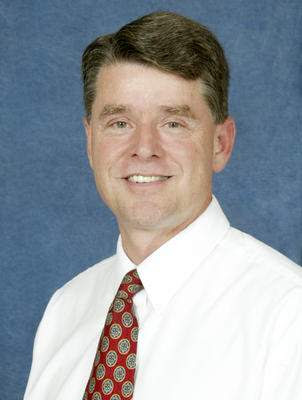 Tom Leatherwood says it's time for a change in Washington.

Leatherwood, 51, an Arlington native, is running against Marsha Blackburn for the Republican nomination for the 7th Congressional District.


Leatherwood on Friday met with veterans and Clarksville residents at the Golden Corral on Wilma Rudolph Boulevard to listen to their concerns and see what issues they face. "Veterans are very well informed," he said, praising the interest each has in what gets accomplished.
The big concerns he's heard on the lengthy campaign trail are no surprise. The economy, gas prices, immigration and the war in Iraq are all major issues Leatherwood has heard during the past several weeks.

But to achieve any goals, Leatherwood said some changes within Congress need to be made.
"I think people are tired of incumbents going (to Washington) and fighting all the time," he said in an interview Friday with The Leaf-Chronicle.


He admits, though, that not all of the country's problems can be fixed overnight. "You can't solve every problem, but you can try," he said.


During his recent campaign, Leatherwood says his opponent has been spreading information that is false. He says Blackburn has claimed he's used tax dollars while serving as the Shelby County register and has gone over his budget.


In truth, Leatherwood said, he has come in under budget in at least two years and has generated a budget surplus. "It's just not true, she's making stuff up," he said.


To address the struggling economy, Leatherwood says he hopes to allow domestic oil drilling and put an end to pork-barrel spending and earmarks, which he says have helped damage the economy.


"That's part of the problem with the deficit," he said, specifically noting a $300,000 trip to the Houston, Texas, zoo that Blackburn allegedly supported.


He also called Blackburn's tactics unethical, referring to the hiring of her children as lobbyists for groups that addressed committees on which she sat. "That creates a real conflict of interest," he said.


Leatherwood also hopes to spark a reform of the Republican party, and says it's possible for the party to pick up seats in November, despite analysts' opposite projections. "With Obama at the head of the ticket, we ought to be talking about picking up seats," he said.


Leatherwood faces off against Blackburn on Aug. 7.
Posted by Deborah at 10:15 AM No comments:

Marsha Blackburn has said that I would support “taxpayer-funded healthcare benefits for illegal immigrants.” This is absolutely not true and she knows it is not true. She is desperate and desperate people say and do desperate things. I am and always have been absolutely opposed to free health care for illegals or a nationalized (socialized) health care system.

If you would like to see the June 4th Commercial Appeal article she refers to on her mail piece, you can click on the link at the end of this article. You will notice that there are absolutely no statements about free healthcare for illegal immigrants. I have also provided a link to a letter to the editor which I wrote addressing the false information she and her staff began putting out weeks ago.

Illegal immigration is out of control and we have a Congress that does not take action. That is in large part why I am running. We need to secure our borders and enforce current laws. I am opposed to taxpayer-funded health care benefits for people who are here illegally. I have spoken consistently on these issues at forums and town hall meetings across the district.

I am a Reagan conservative and have a consistent conservative record as a state senator and as county register. This is why 37 elected Republican officials have endorsed me. For this many elected officials to come out openly for a challenger against an incumbent member of Congress is highly unusual. It’s because they know like so much of the public that our congresswoman talks a good game but she is not effective.

Please help spread the word to correct this bizarre and untrue information that Marsha Blackburn and her operatives are putting forth. Feel free to call me on my cell at 901-569-5100 or at home at 901-867-7780 if you have any questions or would like to discuss this issue.

I humbly ask for your vote in early voting or on election day, August 7th. I ask you to come alongside me to start our country back on the road to the conservative values which made our country great.

Click here to read the endorsement article.
Posted by Anna at 2:29 PM No comments:

www.votetomleatherwood.com
Posted by Anna at 6:53 PM No comments:

ARLINGTON, TN – Tom Leatherwood is gaining rapidly in his campaign for the Republican nomination for Congress in Tennessee’s 7th District, cutting the incumbent’s lead to just 11 points, according to a survey conducted by Ethridge and Associates, LLC. Leatherwood is challenging Congressman Marsha Blackburn in the August 7 Primary. According to the results of a districtwide poll taken on June 28 and 29, Leatherwood trails 37% to 48% districtwide. This shows a net gain for Leatherwood of 16 points compared to a March survey in which he trailed by 30% to 57%. In Shelby County, where both candidates are well known, Leatherwood leads 55% to 30%, a positive swing of 29 points from the March poll that showed him trailing 40% to 44%.

“Tom Leatherwood has the potential to defeat Marsha Blackburn, and his campaign message of public service, not self-service, is resonating with voters,” according to Ethridge. “When an incumbent with name I.D. of more than 90% has locked up less than half the vote five weeks before the election, that incumbent clearly is in trouble,” Ethridge added.

“After talking to voters throughout the district, these numbers don’t surprise me,” said Leatherwood. “Republicans are ready for a change in Washington and that includes someone who will address high gas and grocery prices, the economy and illegal immigration. They are upset when they hear that special interests paid for her to take more than 20 trips to resort locations. They don’t like that she failed to report over $400,000 in campaign contributions and expenditures. And, they know it is wrong when they hear the incumbent has funneled more than $350,000 in campaign and PAC funds to her family."

“We still have a lot to do,” Leatherwood said. “The incumbent has a war chest filled with special interest money, and we already see she’s not hesitating to spend it. Fortunately, money isn’t everything. Last month, a Republican challenger in Utah, outspent by almost $500,000, defeated the incumbent 60% to 40%. I believe, and the numbers back me up, that we’re putting together the campaign we need to win.”

Incumbent Chris Cannon, first elected in 1996, was endorsed by President Bush and both of Utah’s Republican U.S. Senators. Cannon spent more than $760,000 compared to the victorious Jason Chaffetz, who spent just $175,000. Congressional Quarterly’s on-line report cited “the failure of Cannon to generate the kind of turnout typically enjoyed by House incumbents.” Cannon was criticized for his support of comprehensive immigration reform, an unpopular position in that district.

Here in Tennessee’s 7th District, Blackburn faces a similar challenge. The Leatherwood campaign finds that voters disapprove of incumbent Blackburn’s pattern of violating Federal Election law and her funneling more than $350,000 in campaign funds to family members. Tom told me that this election sends to Washington the same message he wants to send, “For Republicans to regain our majority, we have to reform the way we do business in Washington. That means holding our own accountable and replacing them when they lose their way.”

Geography also played a role in the Chaffetz victory. He carried Salt Lake County, his home county and the largest in the district, with 63% of the vote. In the 7th District, Leatherwood’s home of Shelby County accounts for more than 50% of the Republican Primary vote in on-gubernatorial years.

This evening Vance Dennis, our candidate for TN State Representative (district 71), had a rally at the Selmer park. Here are a few pictures from the event. 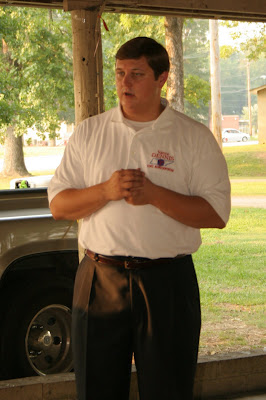 Vance spoke about his vision for the future of our state. One of the reasons we are supporting Vance is because of the stand he takes on the protection of life, marriage, and the 2nd amendment. We also support his goal of working to lower our taxes and prevent a state income tax. 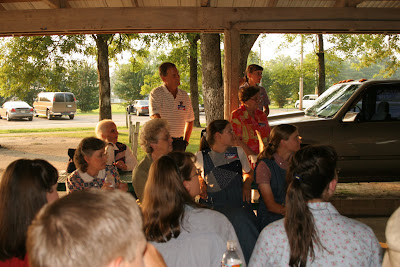 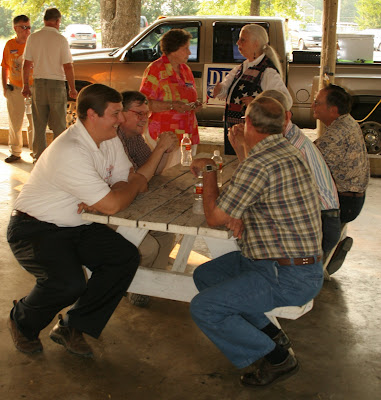 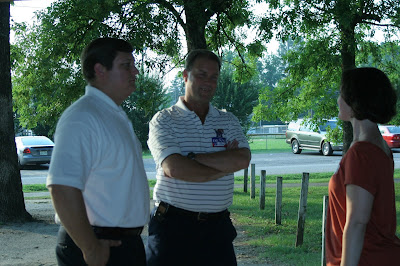 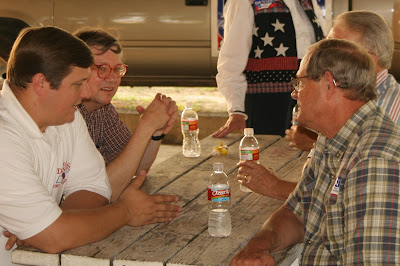 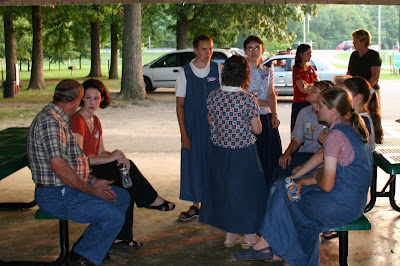 Our family with Vance and Ashley Dennis 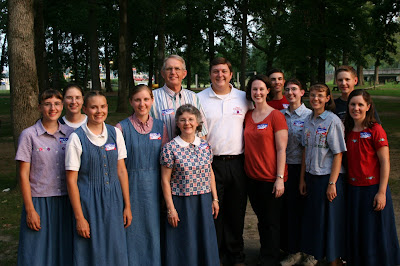 Jonathan and David with Vance 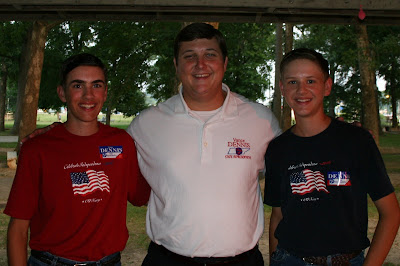 Early voting begins tomorrow in Tennessee, and election day is August 7th. If you are in the 71st district, please take the time to visit Vance's website, http://www.vancedennis.com/, to learn more about him so you can make an informed decision when you go to the polls.