Will Your Voice Be Heard?

In May Rep. Paul Brown (GA), along with 28 cosponsors, introduced a bill in the House that would pave the way to amend the Constitution, recognizing marriage as being only between one man and one woman. In the past week-and-a-half H.J.Res.89 has received growing attention and the cosponsors have grown to 86. Seven Democrats, to date, have also cosponsored, giving a higher percentage of Democratic involvement in this year’s attempt than during 2006. This past week Senator Roger Wicker (MS) introduced a companion bill, S.J.Res.43, which has gained nine of the needed 30 cosponsors.
Traditional marriage has been under attack for many years, but this year the enemies of the family have greatly upped the ante, winning political and legal victories from coast-to-coast. The activist federal judges in California have thrown down the gauntlet, overriding the clear will of the people of that state, allowing homosexual couples the privilege reserved for qualifying heterosexual couples for thousands of years - marriage. God, by the right of being the Creator of marriage, has ordained marriage as being only between a man and a woman, yet the “gay rights” crowd is attempting to steal the acceptance that marriage brings to a relationship for their perverted substitute. It is embarrassing how much they have succeeded. Peter Barbera explained how they have “earned” the political clout they now enjoy this way: "The gays are all about political power. They know how to vote. They're very committed. They're not apathetic like many Christians." Apathetic. We who are to be the salt and light of the earth have chosen to keep the salt and light to ourselves, loosing the salt’s savor and smothering the candle under a bushel. Now the country which we were given, the country in which we have the freedom and ability to let our light shine on the government and on the laws of our land, is being snatched away from us by godless men and women. They are succeeding because we have become comfortable, lulled into sleep by materialism, and have relaxed our hold on what we should have protected with our lives - like our fore-fathers did.
Much has been made of the argument that the federal government has no right to involve itself in the daily affairs of its citizens. Truly, its role is to provide for the country’s defense, in order to provide a peaceful environment in which the people are free to “pursue happiness”. Unfortunately, our form of government can only function in a society which is governed by its conscience, a conscience which fears God. John Adams clearly stated this in 1798: “Our Constitution was made only for a moral and religious people. It is wholly inadequate to the government of any other.” I sadly submit that today we are not a “moral and religious people“. For the most part, the Constitution is the highest authority that people recognize, and there are many “Americans” who defy even that. The Church has failed in its highest calling, to point the lost to Christ, and to disciple them, “teaching them to observe all things” He has commanded. Now we must suffer the consequences of our disobedience, not only the charge of the blood of the lost on our hands, but also the loss of our freedoms. So now, when the proponents of “alternate lifestyles” demand official recognition of their counterfeit marriages, what are we to do? Roll over and play dead, again? Not only does recognition of their relationship devalue every true marriage just as counterfeit money’s acceptance devalues real money, it also harms the already fragile and unraveling moral fiber of society, encouraging destructive behaviors to proliferate. If the only prerequisite for marriage is “love”, how soon will be that we are forced to accept such relationships as polygamy, polyamory, bestiality? How many adoptions of children into homes with two dads or two moms are we going to have to allow? The judges in California have demonstrated the fragility of state constitutions and laws, and given a compelling argument for the adoption of a federal Constitutional Amendment to protect the sanctity of marriage from activist judges.
It is now up to Christians to champion the cause of marriage. While the majority of Christians are still wallowing in their beds of apathy, some even enjoying the moral decadence so freely offered by the world, some are waking up to the seriousness of the situation. What we need are trumpet blowers, sounding the alarm, sounding the battle cry for Christians to stand for the Right. In the upcoming election, it is expected that both Houses will be completely swept by liberal candidates. Our window of opportunity is narrowing by the day. Congressmen and Senators need to hear from the people, imploring them to bring morality back to the our laws and courtrooms, before it is too late. A recent call to the House Judiciary Committee confirmed that the only thing standing between these bills and their passing is public support. However, the majority of the public are both unaware of the existence of the bill and discouraged by the past failures. They need to hear that there has been good progress in both Houses and encouraged that they do have a voice - one that has been silent too long. Will your voice be heard?

Posted by Melissa at 7:42 PM No comments:

A blog has been set up to promote the Federal Marriage Amendment of 2008. It will serve as a one-stop reference site providing information about the current amendment that is being considered in Congress, as well as highlighting the efforts of organizations that are on the front-lines working to advance pro-marriage legislation. Visit traditionalwedlock.org to get the latest news and updates on the battle for traditional marriage.

Posted by Melissa at 6:08 PM No comments:

We haven't gotten a yard sign for Tom Leatherwood, our candidate for Congress, so we decided to paint one yesterday! 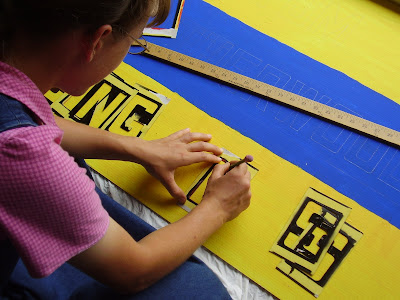 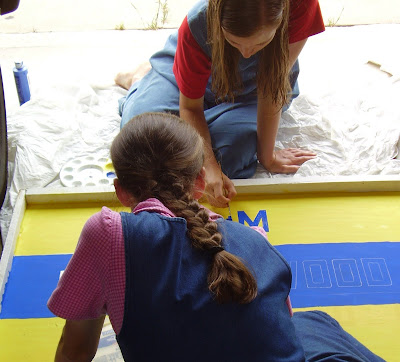 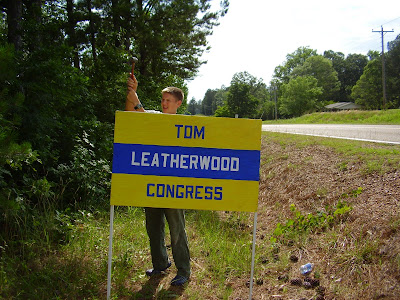 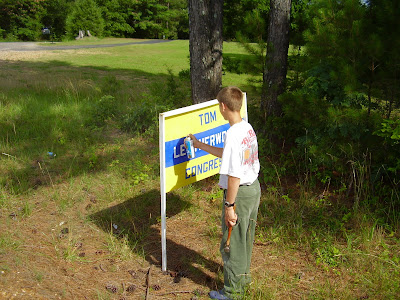 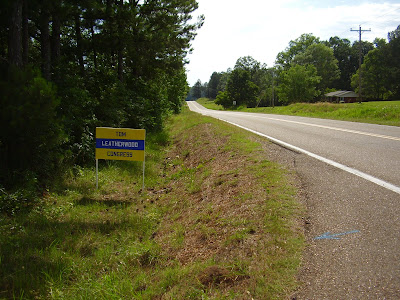 For all of you who live in the 7th district...PLEASE VOTE FOR TOM LEATHERWOOD!!!!!
The Republican Primary is on August 7th.

A new federal marriage amendment bill has been introduced by Rep. Paul C. Broun (GA). H.J.Res.89 needs at least 100 representatives to sign on as co-sponsors in order to bring it to a vote. As of today, there are 66 bi-partisan co-sponsors.

Please join us in defending traditional marriage by contacting your representative and requesting that he become a co-sponsor if he has not yet done so. To find out who your representative is and to send him an e-mail, click here and enter your location. Remember, he is representing you, and needs to hear how you want him to vote. Calls and emails to elected officials are very effective. The "government of the people, by the people, and for the people" needs to hear the people's voice!
Posted by Melissa at 12:21 PM No comments:

A few weeks ago we had the opportunity to meet Tom Leatherwood, candidate for Congress (TN-7). After meeting Mr. and Mrs. Leatherwood, hearing him speak, and talking with him on two different occasions, we think that he is the best candidate for the job. 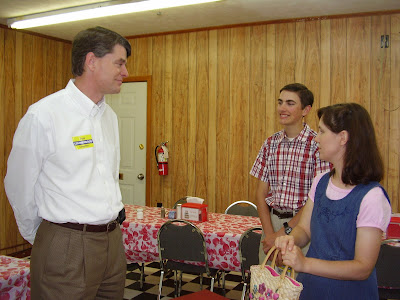 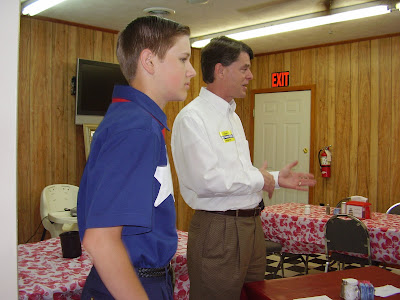 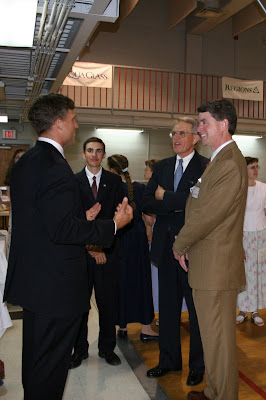 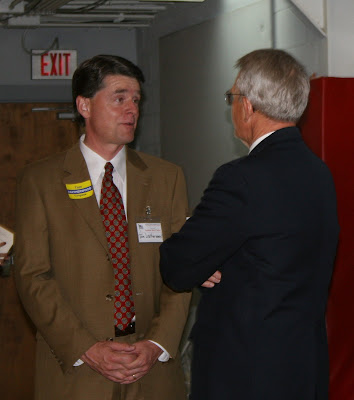 We are supporting Tom Leatherwood because we believe that he will take a stand for the issues that are important to us, such as the protection of life and traditional marriage, parental rights, reforming the tax code, protecting our second amendment rights, eliminating the national debt, and securing our borders.

Tom Leatherwood served in the Tennessee State Senate for 8 years and is currently serving as Register of Deeds in Shelby County. You can visit his website, http://www.votetomleatherwood.com/, to find out more about Tom Leatherwood, his stand on the issues, and how you can help him win the Republican Primary in August, and the general election this fall. Tom Leatherwood is running against Republican incumbent Marsha Blackburn.
Here is a map showing TN Congressional District 7, the area we need to help Tom Leatherwood win. 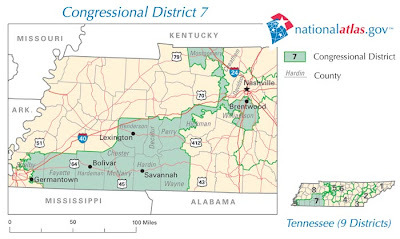 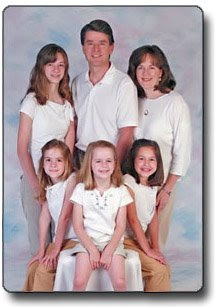