Senator Wilder Will Not Seek Re-election!!!!! 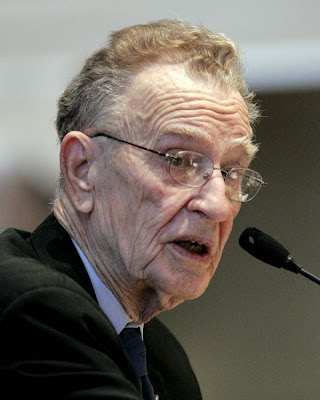 State Senator John Wilder(D) announced Thursday that he will not seek re-election to the District 26 Senate seat that he has held for 44 years. Senator Wilder was first elected in 1958 and served for 2 years. In 1966, he was elected again and has held the position ever since in our district, which includes the following counties: Chester, Crockett, Fayette, Hardeman, Hardin, Haywood, McNairy and Wayne.

After nearly 50 years of the same Democratic representation in the State Senate (ever since Lyndon B. Johnson was President!), we Republicans in the 26th district were already preparing to take back this seat in November...and now that we don't have to run against an incumbent, it will be a lot easier! There are 3 Republicans who have announced their intention to seek the seat: Representative Delores Gresham (Somerville), Dr. Tim Linder (Selmer), and former Savannah Mayor Bob Shutt.

Our family will be checking into the candidates in the next few days and making our decision about which one we will support.
Posted by Anna at 4:43 PM