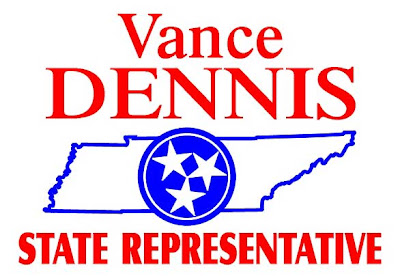 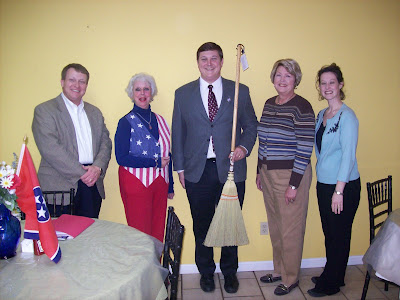 State Representative Vance Dennis was, quite literally, sweeping through McNairy County during March. County officials and Arts in McNairy board members presented a handmade broom to the district 71 representative at a gathering in Selmer. The broom will be displayed at his Nashville office.

Why a broom? Mr. Dennis has expressed a desire to do something more than just decorate his new office in the usual fashion. "Lots of people from across the state and country come to my office at the Capitol throughout the year," he said, "and I intend to use this aspect of my position to promote the benefits of our community to the greatest extent possible." 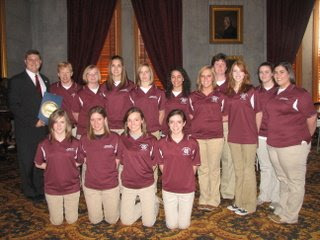 Representative Vance Dennis honored the Hardin County Girls Bowling Team during March in a ceremony on the House floor. The HCHS Girls Bowling Team captured the 2009 TSSAA Division 1 State Championship. Representative Dennis said the high schoolers deserved the honor, not only for winning the championship this year, but for making it to the state tournament every year since the team’s inception in 2002.

“This high school team and their coaches have done an outstanding job, and I’m honored to be able to represent young people like these,” said Rep. Dennis. “They have worked hard, and they deserve this recognition.”

The Governor presented his initial budget proposal on March 23, 2009, to a Joint Convention of the House and Senate. Because of the unprecedented economic situation facing Tennessee, the Governor is proposing a multi-year approach, and laying out possibilities for the next four years. He explained that much of the American Recovery and Reinvestment Act (ARRA) money, which totals approximately $5 billion over two years for Tennessee, comes with many strings attached.

Stimulus funds will foot much of the TennCare bill
More than a billion dollars of the ARRA funds will be used to temporarily foot the bill for TennCare—the state’s Medicaid program— in order to free up the state dollars to fund programs elsewhere. While other states will be required to use this money to plug holes in their Medicaid programs, TennCare is in a stable position. Additionally, TennCare had approximately $500 million in their reserve account at the beginning of the year.

Higher Education may dodge a bullet
Although large reductions were expected in higher education, the ARRA dedicates $500 million specifically to higher education, meaning that the anticipated cuts are no longer necessary. Reductions that had already taken place will now be restored to the tune of $100 million this year.
The budget proposal stipulates that higher education will be fully funded for the next 21 months from stimulus funds. However, the possible $180 million shortfall when the stimulus funds are no longer provided has caused concern for many legislators.

Accepting the money will mean that Tennessee has to adopt three federal mandates at a projected outflow of $30 million annually. A part-time worker definition, alternative wage base calculations and dependents allowance must be adopted by the General Assembly in order to qualify for the stimulus funds. If these measures are adopted, there will likely be a need to end these mandated benefits once the federal monies are exhausted to sustain the fund in the future.

For more information about the ARRA, go to visit http://www.tnrecovery.gov/.

In the same vein, House Bill 1778 would prohibit lawfully possessed firearms from being confiscated during periods of martial rule, and House Bill 233 would allow permit holders to carry in restaurants that serve alcohol.

House Joint Resolution 149, a constitutional amendment which guarantees Tennesseans the right to hunt and fish, is also working its way through the General Assembly and, if it passes in the legislature with a 2/3 majority vote, it will appear on the ballot in 2010 in a voter referendum.

The legislature is also considering legislation that would create a “wine at retail food store license,” which would allow the sale of wine at grocery stores. The license would be issued by the Alcoholic Beverage Commission and only in a county or municipality that has authorized the sale of alcoholic beverages. Businesses who obtain the license would still be subject to rules and regulations governing current liquor and beer laws, and would also be subject to the “Responsible Vendors Act,” which requires mandatory carding.

There is also a great deal of debate about the method that Tennessee uses to select its appellate and Supreme Court judges. Tennessee currently uses a merit-based selection process whereby the Tennessee Judicial Selection Commission, a panel composed of 17 members, interviews applicants and offers the Governor a slate of three candidates to fill a vacancy on the court. The Governor then picks one of the three candidates, or rejects the entire slate. If the Governor rejects all three candidates on the first slate, he can request another. If this occurs, the Governor must then make a selection from the second slate of candidates. After being appointed, judges are subject to “yes/no” retention votes every eight years. Many legislators have expressed support for a change in this system that would require these judges to be selected by statewide election.

Please let me know if you have any questions or concerns about these or any other bills that are being considered by out state legislature.