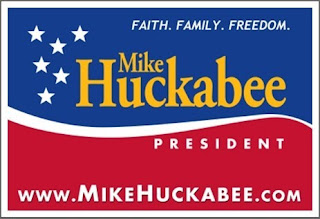 Here is a copy of an email we sent out to friends and family a few weeks ago.

With the 2008 presidential caucuses and primaries beginning in fewer than 12 weeks, it's time for every Christian citizen to get informed about the candidates and begin taking action to prevent the nomination of a liberal Republican. We must nominate a candidate who will pose so sharp a contrast to Hillary Clinton that he will be able to defeat her next November. As proven in the past, running a liberal Republican against a liberal Democrat doesn't work. We must nominate a conservative Christian candidate who stands for our values and freedoms.

We are writing this email to tell you why we are supporting former Arkansas Governor Mike Huckabee for the Republican nomination. Gov. Huckabee is a proven conservative, an unashamed Christian, and an experienced leader. He was a Baptist pastor for many years, Lt. Governor of Arkansas for 3 years, then Governor for 10 years.

Abortion:
Gov. Huckabee believes that life begins at conception and supports a passage of a constitutional amendment to protect the sanctity of life. He believes that abortion at any time and for any reason is wrong, and believes that Roe vs. Wade should be overturned.

Stem Cell Research:
Gov. Huckabee believes that it is wrong to create life for the purpose of destroying it.

Immigration:
Gov. Huckabee plans to make immigration one of his first priorites. He believes that those who are caught trying to enter illegally or living here illegally must be detained, processed, and deported. Illegal immigrants who are already living among us who commit crimes must be prosecuted to the full extent of the law and incarcerated or deported. Gov. Huckabee supports the project of building border fences and deploying more guards to the borders.

Foreign Policy:
In Gov. Huckabee's own words: "I believe that we are currently engaged in a world war. Radical Islamic fascists have declared war on our country and our way of life. They have sworn to annihilate each of us who believe in a free society, all in the name of a perversion of religion...We go to great extremes to save lives, they go to great extremes to take lives. This war is not a conventional war, and these terrorists are not a conventional enemy. I will fight the war on terror with the intensity and single-mindedness that it deserves."
Gov. Huckabee is a steadfast supporter of Israel and believes that the United States must remain true to its commitment to Israel. Gov. Huckabee believes that winning the war in Iraq is part of winning the war on terror and that we cannot leave until we can leave with honor.

Marriage:
Gov. Huckabee believes that marriage is only between one man and one woman for life. He has consistently supported passage of a federal constitutional amendment that defines marriage as a union between one man and one woman. As Governor of Arkansas, he led the successful effort to pass a similar state constitutional amendment in 2002, and led the successful effort to make his state the third to adopt "covenant" marriage.

To read more about Gov. Huckabee's stand on these and other issues, visit his website, www.mikehuckabee.com.

Gov. Huckabee is the candidate that conservatives are looking for. In spite of his small amount of funds and lack of name recognition, he is steadily rising in the polls, especially after each debate. Instead of talking about a "4-man Republican race" newsgroups are now realizing that it has become a "5-man race." With the support of Christians across America, Gov. Huckabee can win the Republican nomination and then go on to become our next president. It is your privilege and duty as an American to not only vote, but also to get involved in helping conservative Christian candidates in their campaigns. Please join us in supporting Gov. Huckabee by getting the word out, getting involved in the campaign, and most importantly, praying that God will have mercy on our nation! If you are not registered to vote, don't wait! Most states' primaries will occur in early 2008 and if your registration has not had time to be processed, you will not be allowed to vote.

Thank you for taking the time to read this! May God bless you!


Follow this link to hear a wonderful speech given by Gov. Huckabee on Oct. 20:
http://www.mikehuckabee.com/index.cfm?FuseAction=Blogs.View&Blog_id=617
Posted by 11 Smiths for Huckabee at 9:11 AM