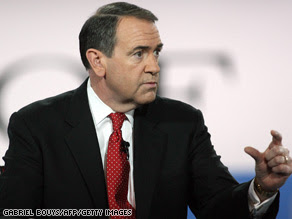 We weren't able to watch the debate last night because the live streaming wasn't working well with our internet connection, but we were able to listen to the whole thing, and of course, we thought that Gov. Huckabee easily won the debate!

The debate was planned to be a McCain-Romney show, but it turned into a McCain-Romney squabble with Gov. Huckabee coming across as comfortable, well-informed and very presidential, even with the small amount of airtime given him. Click here for CNN political analyst Bill Schneider's analysis of the debate, and click here for a story from Politico about Gov. Huckabee changing some minds by his performance.

Gov. Huckabee has never been given as much time to speak in the debates as his rivals. The fact is, he hasn't needed it. He is such a great communicator that he is able to articulate his message, ideas and principles clearly and concisely and with a conviction and passion that speaks right to the heart of the American people.

The clip below of Gov. Huckabee's answer to whether or not Ronald Reagan would endorse him is just a sample of how he handled the questions last night. For the full debate transcript and more video, go to http://www.cnn.com/2008/POLITICS/01/30/GOPdebate.transcript/index.html